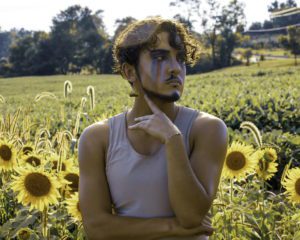 I first saw King Vaughnz Spanic at Denver Pride’s Main Stage. A wonderfully energetic stage presence and some great use of a blow up air guitar ignited the crowd. It’s fantastic to see an drag king not sacrifice positivity for sexiness.

GayDenver: Tell us a little about yourself!

King Vaughnz Spanic: I’m a biracial (half-Mexican), bisexual, nonbinary, transmasc, full-time college student. I’m getting a Bachelors in Psych, a minor in Music, and LGBT Studies Certificate at CU Boulder. I grew up in Southern California, went to high school in Ohio, and ended up in Colorado for college.

The King in my name is from King Princess, Vaughnz is a play on my old middle name, and Spanic was added when I turned 21 to officialize my part in the Haus of Spanic.

GayDenver: How would you describe King Vaughnz Spanic? How would others describe you? 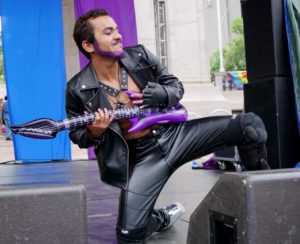 King Vaughnz Spanic: When I first started, I was described as a [email protected] boy, which I wasn’t really a fan of. Jessica L’Whor put a better spin on it. She described me as a wholesome, respectable [email protected], and other people have described me as a wholesome frat boy. I always thought that fit really well. I do see myself as a player, but not in a disrespectful way. I want to make people feel comfortable and good about themselves.

GayDenver: How old is King Vaughnz Spanic? What brought him about?

King Vaughnz Spanic: He just turned 3 years old Nov 2 of this year! I started drag when I was 18. When I started to question my gender, some drag kings popped up on my YouTube recommendations. A couple years later, I saw that the college I was looking at  had an annual drag show. I decided to jump into it head first. After, I messaged gay bars over FaceBook to see if I could perform. 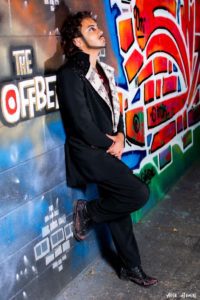 GayDenver: Can you tell us about how being transgender influenced your drag and drag experiences?

King Vaughnz Spanic: What hasn’t been influenced by being transgender? As I figured out my identity, I was able to experiment with expressing those feelings. My parents weren’t accepting, so drag was a way for me to experiment without starting any kind of transitioning. Over time, I became more comfortable and received the support that helped me begin my transition. I was and am able to use my platform to show my pain, journey, and joy. My drag evolves as I do. I definitely have to advocate for myself more with all of my identities.

Drag is very gender biased. Most people still introduce casts as queens, she/her, or girls, despite there being a king and/or nonbinary performers on the cast.

I love hearing stories of how I have influenced people to start drag, find their identity, start transitioning, or come out, and I want to continue being an inspiration for others.

GayDenver: Performing on the main stage at Pride 2022 is a big deal! How did that come about?

King Vaughnz Spanic: It was amazing. It was actually my first time going to Denver Pride. I was definitely nervous, as it was the largest crowd I’ve ever performed for. It was a little disappointing not being able to interact with the crowd. 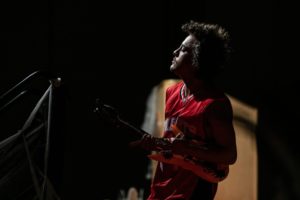 King Vaughnz Spanic:  I saw The Center was holding auditions for mainstage pride at LUCID, which was unfortunately shut down. They had a few Center board members and just random people that were watching and supporting some of the artists. Everyone had a three minute time slot. There wasn’t really any feedback but some people were told immediately whether or not they made it. I wasn’t one of those people (chuckles), so that was nerve wracking. A few days later though I got the call!

GayDenver: What does drag mean to you?

King Vaughnz Spanic: Drag means being unapologetic. It means being who you want and embracing those parts of yourself you might not have known about. Drag is about community and understanding, being there for others and helping each other survive in a society that casts us aside. It’s about respecting history and giving credit to Black and Brown trans women for fighting for our rights and creating the scene. Drag allows me to escape, reflect, and interpret reality in different ways.

GayDenver: Let’s talk about the journey from where you started to where you’re going.

King Vaughnz Spanic: I saw drag kings on YouTube and CU Boulder had an annual show, which sparked my interest. Before I even got on stage, my parents found out about my interest in drag and my practice pictures. They were not accepting. I remember my Mom saying that it was okay  as long as I wasn’t trying to be a boy. That pushed me to prove them wrong with my success. It gave me the drive to establish my name. I would take the bus for nearly 3 hours each time for a show. I wasn’t even getting officially paid, just tips and donations.

I competed in one of the bigger competitions in Denver (Ultimate Drag Battle), but then COVID hit and slowed me down. I did start getting paid when I got back, and kept bussing until August 2021. I competed in a National pageant as Mister Gay United States Colorado MI 2021 in May of 2021 in Virginia and placed 9 out of 19. To date, I have done at least 87 live shows and 41 online shows. I have performed in 4 states and would like to keep expanding that, performing for pride in each state I have lived in, as well as every Hamburger Mary’s restaurant. 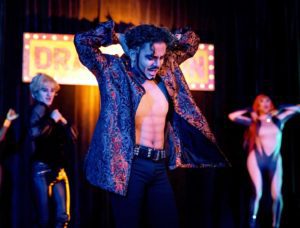 GayDenver: How do you create your acts?

King Vaughnz Spanic: I improvise as much as I can. When I hear the lyrics, I try to visualize what I’m going to do and when I’ll do it. I keep my plan loose, so I can do what feels right in the moment and for the audience. When I’m going through the numbers, if I start to feel emotional I stop, so I can save that emotion and energy for the performance. I want my reactions and presence to be authentic, not planned out.

King Vaughnz Spanic: Wherever I am supported, appreciated, and respected most. I like a good venue that will allow me to interact with and connect to the audience. Recently, I’ve liked performing at Hamburger Mary’s because of the spotlight and environment, and Tracks is also a great stage where I can be seen by everyone and still interact.

GayDenver: Is there anything you would like to tell our readers?

King Vaughnz Spanic:  I have anxiety and am very introverted. People who know me personally are always very surprised to see my drag persona. Don’t let your anxieties stop you from doing what you want. I’m available to answer questions about drag, as long as it is a respectful conversation.

Did you like this article? Read more about Denver’s Drag Artist’s: