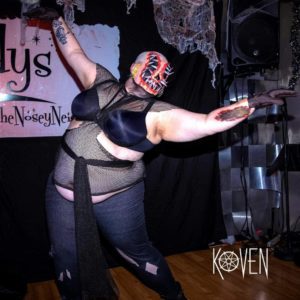 Caulder Goodlay: Leading the Way for Horror Based Drag Shows

I originally saw Calder at Fusions Bar and Grill. I was amazed by their energy and passion, a well rounded blend of horror, laughs, and metal. It was like like the drag show was taking place on Dragula. When I found out more about them I knew I had to get him in for an interview. I was surprised to hear the reasons Calder was created and amazed to learn how he changed over the years from a dark beginning.

Calder Goodlay:  Calder’s pronouns are They/He/It. His sexuality is…. He’d like you to think that he’d f%^# anything that moves but in reality he’s doing what he must to get another sacrifice. My pronouns are the same but I’m more Pan Romantic.

Calder Goodlay: Calder is like the Uncle Fester of Denver. He’s goofy and fun but can be surprisingly terrifying drag king

GayDenver: Where did the inspiration for Caulder come from (including the name)?

Calder Goodlay: The name was supposed to be Lucas Jack King or something like that. When I started performing, I just didn’t like the sound of and reactions to that name. I’m Scottish and wanted to incorporate that somehow. I was looking through a list of popular Scottish names for the year I was born and I liked Calder. I was stuck on Goodmorn for the last name but it wasn’t quite witty enough for me so Goodlay it became!

GayDenver: How long have you been doing drag? What got you started?

Calder Goodlay: October 16th, 2022 was Calder’s 6th birthday. What got me into drag? Spite. I was really excited about Ru Paul’s drag race. I started to do research on what it would be like for a drag king. Through that research I  stumbled upon Spikey Van Dykey and Landed Cider. My abusive boyfriend at the time was completely against this. He was an ass that thought I should just be wearing makeup and dresses.

I wasn’t able to start performing immediately after I realized what I wanted to do. There this fire to prove something to myself and my ex and nothing to do with it. Eventually I joined my first drag troupe, Mile High Kingdom. I was able to audition my way into this very  boyband-esque group I started off playing a very player, f%^# boy cool guy persona.

I was intrigued by this drag show competition that featured alternative drag: WIERDO. It was love at first sight. I knew this is how I wanted to express myself and my art in this way. Being a preppy boy band member just didn’t feel authentic. I was having fun with Mile High Kingdom, and learning so much from them. But once I saw WIERDO, the weird, gothic, macabre aspects just really resonated with me only on a more personal level. 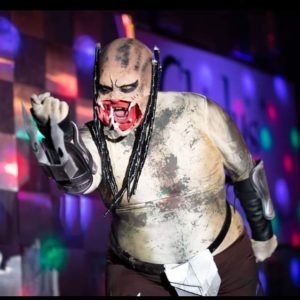 GayDenver: How would you describe Calder’s evolution through the years?

Calder Goodlay: My first night performing at WIERDO I got a perfect score. I was the second person at the time to do this. I didn’t win the competition but that was a confidence building moment. With that confidence, I got creepier and creepier. After I started to feel comfortable expressing darker motifs, I started to throw geekier elements into it, costumes from video games like Portal and Borderlands.

I started to feed off people’s reactions to my performances. I just love the gasps and laughter when I tear off a doll’s head  filled with red glitter and poured it all over my face. I’ve worked in haunted houses before, so I was comfortable making other people uncomfortable.

Once I transitioned to alt drag, I never really went back. There are rare times that I’ll be feeling it, but that’s once in a blue moon. There are darker twinges present in those numbers so it doesn’t feel like regression.

GayDenver: What are your sources of inspiration?

Calder Goodlay: I’ve always been fascinated with really intricate make up. There are special effects like youtuber PINKSTYLIST. I do a lot of horror, animated horror faces. A lot of my more recent faces have been inspired from Dahli from Dragula.

The process to create a number is very sporadic. Typically I’ll be listening to music or watching a movie and think ‘what if?’. It’ll take on a life of its own. I was listening to Veggie Tales ‘I Love My Lips’ and wondered what if he wasn’t talking about the lips on a face?!? I made a large paper mache pair of labia and wore it to that song.

GayDenver: Where are you from?

Calder Goodlay: Born and raised in Colorado. Mostly Lakewood/Littleton area but in and out of the Denver Metro area.

GayDenver: What type of music do you like to perform?

Calder Goodlay: Metal covers of pop songs are a comfortable go to. That way the crowd recognizes the song but it’s more in my style. I did ‘Truth Hurts’ by Lizzo and that went over really well.

GayDenver: If Caulder could put anything on a billboard what would it say?

Calder Goodlay:  Be the word you want to see in the world.

GayDenver: Where do you like to perform? Where can we see you?

Calder Goodlay: I’m all over the Denver drag scene, I don’t necessarily have a home bar. I’m at Hamburger Mary’s fairly often, HQ, or Tracks.

GayDenver: I love the big energy you hit the stage with. What’s your secret to that confidence?

Calder Goodlay: While I was with Mile High Kingdom, I picked up a ritual that I’ve kept with me. If I’m feeling nervous or low energy, I step outside and just let loose a deep guttural roar. I don’t do it every time, but more often than not. It’s something that helps me feel grounded, present and powerful.

GayDenver: Is there anything you would like to say to our readers?

Calder Goodlay: If you want to try drag, do it. Do the work, put time into your act.