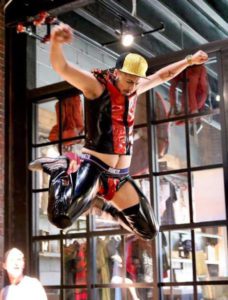 Dustin Schlong may be a newer drag king but he’s definitely made a splash across the Denver Drag Scene.  Below we get a chance to talk to Dustin about what catapulted him into the drag scene. Known in the biz as a ‘Pop Pop’, he’s a goofy, high-energy stage presence.

GayDenver: Where are you from? How did you get started in drag?

Dustin Schlong: Born and raised in Colorado, mostly in the Littleton area. I’ve been doing drag for about 5 years now. I always used to go to this drag queen bingo weekly with some friends and really enjoyed it. It was always so lively and funny. One night I was walking by a poster advertising a drag king game night. That really caught my attention. I popped in to check it out and got to meet a lot of the horror kings from five years ago. They really started everything for me, they threw a beard on me, did my eyebrows, and let me participate in the show. When it ended I felt amazing! The experience really touched on something deep. I knew I wanted to be involved in this. I knew that I wanted to recreate that experience. The drag king in charge of the event answered my initial barrage of questions. From there, I really jumped in feet first.

GayDenver: How would you describe your style of drag?

Dustin Schlong: *laughs* It ranges from f*** boy to dorky dad figure. For a lot of my pop and mainstream numbers, I use more of a fuck boy/Bieber/MGK aesthetic. For just about everything else, my vibe is more campy, comedic, and dorky. I’m known as Pop Pop in the scene, a dorky guy that makes sure everyone is drinking their water.

GayDenver: How has your drag evolved over the years? 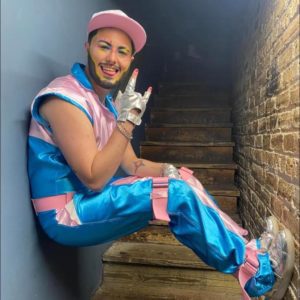 Dustin Schlong: Makeup has seen the heaviest evolution. I’ve gone from a chin strap beard to a little makeup to a full beard and full makeup. I’ve still got a lot to learn but others have seen and commented on the improvement. Having had no background in makeup or anything like it, I’m proud of my progress.

My attitude and approach have changed a lot as well. I used to do this just for fun, but now I’m really mindful of the representation I represent and the activism side of drag. Everything I do on stage or in the public eye is purposeful and well-intended. I want Dustin to leave a trail of support and positivity in the community, there’s already so much negativity and misunderstanding out there. I still have fun though, that hasn’t changed! It’s been a wonderful and crazy journey.

GayDenver: When you mention the activism side of drag, can you elaborate on that?

Dustin Schlong: As a drag king, we are not seen the same way as drag queens. I try to use my platform to make sure that I am heard and seen so that other people can hear and relate to it. As a trans man, advocating for trans people and their rights is incredibly important to me. Trans people get washed under all the time and I’ve felt those effects. I like to remind people of our roots and how black drag queens were so critical of that.

As a cancer survivor, I advocate for people to make sure that they are taking the steps necessary to protect their personal health and safety. Particularly in my trans family, transitions can take unpredictable turns which is what happened to me.

GayDenver: How long ago did you have cancer?

Dustin Schlong: Three and a half years ago I was diagnosed with ovarian cancer. I just had my three-year remission birthday on September 16th. That was a ‘fun’ diagnosis to have as a trans man.

GayDenver: Did you encounter any discrimination while seeking medical aid?

Dustin Schlong: Overall my experience was solid, I got my treatment at Skyridge in Parker Colorado. I had the sweetest nurses that gave me everything I needed to succeed. I didn’t have anyone questioning me or giving me a hard time. There were a ton of looks of confusion and side glances when I would go into the gynecologist’s office. I think a lot of people were just confused.

If it came up in conversation, I would always have to pause. Is this person going to question me? Should I be honest or just give a generic answer: reproductive cancer? I’ve also had a lot of surprising conversations. ‘Wait cis men can get ovarian cancer?’

GayDenver: Do you ever get criticized for being a trans man being a drag king?

Dustin Sclong: It’s been a weird journey with my transition. Being trans and performing as the gender I identify with, I’ve definitely run into backlash. They ask , ‘Where is the transformation?’ I can still be transformative. I am a trans man that grows his beard out and does over-the-top makeup. You can change a person a lot superficially, to the point they aren’t recognizable.

As I’ve progressed through my transformation to become more ‘passing’ per se, people question me more heavily. This is me and this is my drag. There will be people that don’t understand but you can’t let those people get in your way. Drag is art and representation, it can be done a thousand different ways.

GayDenver: What are Dustin’s inspirations?

Dustin Sclong: Originally it was Bieber. I was obsessed! I had this long-lived fantasy of doing a Bieber number on stage with choreographed backup dancers. In the new year at Tracks’ Drag Nation, I actually got to do it, which was a dream come true.

Nowadays though it’s Young Gravy, he’s a dorky rapper that’s obsessed with older women. I love his weirdness and the fun, upbeat vibe of his presence.

GayDenver: Is there a moment where you and Dustin connected? Where did Dustin take on a life of his own?

Dustin Schlong: I just dived in head first to the drag world. I entered a competition at Tracks and that’s where everything took off for me. I had to do everything according to the weekly theme: makeup, choreography, and costumes. Having to work under those rules and goals really helped solidify who Dustin was.

Dustin helped me find myself though. Before drag, I thought I was a CIS lesbian, once I put on the beard and the makeup that changed. It just felt right. I felt more like me than I ever had before. It helped me realize that I’m not a girl and that I needed to run with this feeling beyond performing.

GayDenver: What’s one of the more surprising experiences while doing drag?

Dustin Schlong: I was surprised at the discrimination and aggressiveness the LGBT+ community has within itself. There was a lot of dead naming, disrespect, and willful ignorance within our own community. I thought that we as a community would be further along in respecting each other and their experiences.

GayDenver: Got anything fun cooking up for the holidays?

Dustin Schlong:  Myself and a few entertainers will be putting on a very special Christmas show but readers will have to keep an eye out for it. Going to be doing a Halloween-infused Christmas show.

GayDenver: Where can people find you?

Dustin Schlong: I host a show at XBar and perform there the most. I also like going to Tracks and Charlie’s.

GayDenver: Got any words for the readers?

Dustin Schlong: If you have ever wanted to do drag, but it isn’t traditional, DO IT! Don’t let the mainstream media or anyone for that matter stop you from being happy and expressing yourself