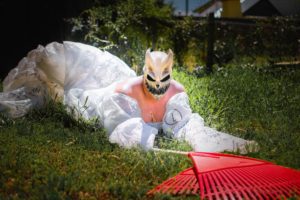 I first saw Belle Fegore in Drag performing at Gladys and I was instantly in love. With demonesque makeup and a wonderfully dark beat to menace the stage, I watched the crowd hold their breath. Since then, every act I’ve seen them perform has been something wildly different and significant. Belle is currently the reigning champion of the WEIRDO variety act that goes on monthly at Trade. It’s easy to understand why. Watch out for her shows and come for a delightful surprise!

Belle Fegore: Belle goes by they/them pronouns. They are this horror, heavy metal drag demon that I decided to create. I gave them life and they ended up giving me life. They allowed me to dig up these fears and insecurities that I had and put them out into the open. 80’s horror movies very much inspire Belle Fegore. Scary and gross at first, but then hits you with a few cheesy jokes that make you laugh.

GayDenver: How old is Belle?

GayDenver: When did you start doing drag? What did it look like? How did it evolve? (segment out)

Belle Fegore:  I had never done drag. I used to go to a lot of local drag shows, and the performers and the environment inspired me to want to try it out. A friend asked me to help with a toy drive and that was my first venture with Belle. My style started as very pretty and natural. After a few rounds of that, I started to realize that pretty much just wasn’t in it for me.

Dragula was starting to bring alternative drag into a more visible space. Seeing that take off, I began to realize that I wanted to be scary and funny and emotional more than I wanted to be beautiful. I wanted to showcase everything that mainstream drag just wasn’t: gritty, gross, vulnerable. When Ru Paul had Sharon Needles on the stage it brought openness, and started the mainstream’s acceptance of alternative, more shocking types of drag. 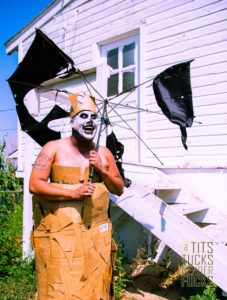 Belle Fegore: I started as more tame in both makeup and content. I was caught between doing the club kid look and what was the standard for drag. As I experimented more (with makeup), I felt that it was inauthentic. I was more creative and confident when I was openly trying to be scary or funny.

I’ve been obsessed with Halloween and horror since I was a kid. It’s always fun for me to dress up in that respect, so I started leaning on that inspiration. The more horror I pumped into my performances, the more self-expressive I felt.

I made the change to full-blown horror quickly once I started. The few times I tried to be pretty there were always all these unwanted criticisms about my hair, lashes, and all that. I got fed up with the nit-picking: f*@$ lashes, f*@$ wigs, you get slasher and that’s that!

GayDenver: How was Belle received by audiences once you started making that transition into horror?

Belle Fegore: Ya know, *chuckles* not the best at first. I was performing at different clubs around town, introducing people to my persona and people would tell me things like you can’t perform something that crazy. Some clubs asked me not to come back because of how out there my performances were perceived.

More than a few drag artists that I had supported did not support me in the community because of how different what I was trying to do was. A lot of people that I used to be friends with criticized me for going to shows like WEIRDO. It was just so far removed from the crowd I used to run with, they didn’t understand the community or attempt to take part. Once I dropped the people that weren’t supporting me wonderful people like (insert names here) came into my life. The rest is history.

Belle Fegore: Gladys was my home for a very long time. I miss the community and venue there so much. There are still other great places that I like to haunt: Trade (the new home of WEIRDO), X-Bar, and Hamburger Mary’s. There’s another bar that’s special to me, R Bar up north in Fort Collins. I’m from that area so getting to perform out there is always really special. It’s so close to home both physically and mentally. Lola Gag hosts a show out there that highlights alternative drag artists in that area. It’s one of the only shows in that region set up specifically for alt drag.

GayDenver: How do you create your performances? We love that you try to bring elements of fear and humor directly into it.

Belle Fegore: To create a performance I go by either what I’m listening to the most in music or whatever horror theme I’m currently fixated on. I’ll focus on an element and conceptualize it into a show. When I created the Freddy Krueger number I was listening to SEX DREAMS by Gaga a lot. Freddy is my favorite 80’s monster and here I have this song about dreams. Once I made that connection the rest wrote itself.

All it was missing was the comedic aspect that I like to incorporate into all my numbers. I added This Is What Dreams Are Made Of by Hilary Duff at the end. The second it starts playing the crowd goes crazy with laughter and that’s exactly how I like to end my numbers. 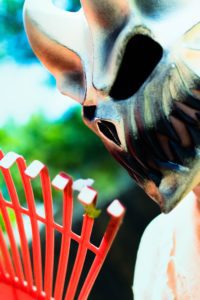 GayDenver: Got any special numbers you are planning?

Belle Fegore: I’ve been working on this number that I’m super excited about. It takes the reverse bear trap from the SAW movie and involves Charlie XCX’s Unlock It. I’m looking forward to performing it.

GayDenver: If you could put something on a billboard what would it be?

GayDenver: Is there anything you’d like to say to our readers?

Belle Fegore: To all the BIPOC artists that want to break onto the alternative drag scene: Don’t be afraid to be who you are and get out there. The alternative and goth communities are predominately white, but that space is ours as well.